I’m at Andrews Air Force Base waiting for a plane to take me to Guantanamo Bay, Cuba, to monitor hearings in the case against Khalid Sheikh Mohammed (KSM) and four other alleged masterminds of the 9/11 attacks (the “9/11 case”). The hearings are scheduled to occur from 28 April through 5 May 2018.​

I arrived in Washington, D.C. on Thursday, April 26 and have been preparing for my final exams that I am taking the week after I return from Gtmo.

This week’s hearings may likely include the following issues, including motions regarding CIA black site location information, access for the Defense to interview current or former members of the CIA, the Trump administration’s influence on military justice process, access to further evidence through discovery, current confinement issues, and procedural issues regarding the speed at which unclassified pleadings are released publicly.

I will report back after my observation this week.

I am a third-year law student at Indiana University McKinney School of Law, and have participated in the law school’s Military Commission Observation Project (MCOP) as an NGO Observer since October 2016.  The MCOP is part of the law school’s Program in International Human Rights Law.

I was confirmed by the Pentagon to attend, observe, be observed, analyze, critique, and report on military commission hearings at the Guantanamo Bay Naval Base (GTMO) in the case against Khalid Sheikh Mohammed (KSM) and four other alleged masterminds of the 9/11 attacks (the “9/11 case”). The hearings are scheduled to occur from 28 April through 5 May 2018. 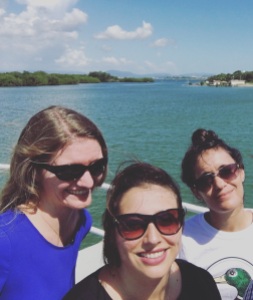 Background and Interest in Observing

I became interested in the MCOP during the fall of my second year of law school after hearing about the program and other students’ experiences in observing the hearings. Stemming from my interest in human rights, I applied to participate in the MCOP observations. 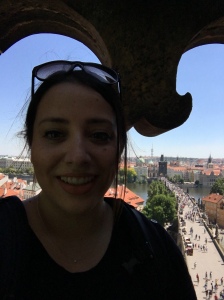 Touristing in a bell tower while working with refugees at an NGO in Prague.

In the summer of 2017, I worked in Lisbon, Portugal and Prague, Czech Republic at non-governmental organizations (NGOs) through the Program in International Human Rights Law (PIHRL), which is the program that administers the MCOP.  During my time in Prague, I had the incredible experience of working with people seeking asylum in Czech Republic.

The PIHRL recently celebrated 20 years of successful internship placements around the world. I was also a research assistant to the program director of PIHRL in the fall of 2017. This coming fall, I will be working abroad  in an area of international human rights law.

Even though my observation is a few weeks away, I am preparing now so that I am fully informed and updated on the hearings. I am paying careful attention to a document developed and written by MCOP participants titled What Human Rights Non-Governmental Organization (NGO) Observers and Others May Want to Know Before Traveling to Guantanamo Bay, Cuba. This document, of which Professor George Edwards is the principal author, provides all of the information necessary to successfully prepare for and complete a mission to Guantanamo.  Without this guide, preparing for my mission would not be complete, even though I have traveled to Ft. Meade and Guantanamo in the past. It is a resource that is full of information not only for the first-time participant, but also for the seasoned observer.

I will soon begin to prepare my travel arrangements to Andrews Air Force Base in Maryland, where I will depart to Guantanamo Bay.

The MCOP has developed a special coin for distribution.  I will have a few coins available during this observation.