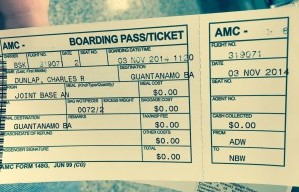 Chuck Dunlap arrived at Andrews Air Force Base around 6:00 on the morning of Monday, 3 November 2014 for his flight to Guantanamo Bay, Cuba to monitor the U.S. Military Commission hearings in the case of al Nashiri, an alleged mastermind of the 2000 suicide bombing of the U.S.S. Cole off the coast of Yemen.

Mr. Dunlap had difficulty posting a post this morning, so we are re-posting his Andrews’ photos. He will post again upon his arrival at GTMO later today.

At Andrews Air Force Base. This is the chartered plane that will take Chuck Dunlap from Andrews to GTMO today.

This morning, Mr. Dunlap reported “We had a brief delay waiting for VP Biden’s plane to leave.” So, they were expected to arrive at Guantanamo Bay later than expected. 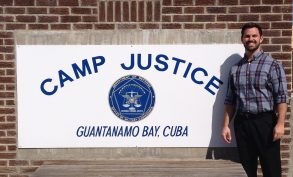 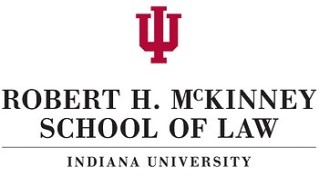