Non-governmental organizations (NGOs) fly to Guantanamo Bay, Cuba for ringside seats at U.S. Military Commission war crimes proceedings. NGOs, which tend to focus on human rights issues, attend, observe, analyze, critique and report on what they see and hear at Guantanamo. NGOs are windows to the outside world for people without Guantanamo access.

For the first time in recent memory, this week NGOs at Guantanamo had separate briefings by each of the three sets of lawyers involved with a pending case against a particular defendant.

The 9 NGO representatives present were briefed by: (a) the Chief Prosecutor; (b) the Chief Defense Lawyer; and (c) the military and civilian lawyers for al Nashiri, who is accused of masterminding the 2000 bombing of the U.S.S. Cole off the coast of Yemen, killing 17 U.S. sailors and wounding dozens. The NGOs were at Guantanamo for a week of pre-trial hearings in the case of al Nashiri, who faces the death penalty.

The first lawyers’ briefing of the week was by Chief Prosecutor Brigadier General Mark Martins, who is responsible for the prosecution of any and all Guantanamo Bay detainees. He is formally part of the prosecution team against all defendants, including al Nashiri, and he actively participated at the prosecution table in this week’s hearings. 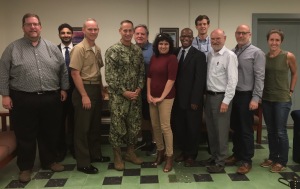 The next lawyers’ briefing was by Chief Defense Counsel Brigadier General John Baker, joined by Deputy Chief Defense Counsel Captain Brent Filbert.  General Baker is responsible for all defense counsel on all Guantanamo cases, and is not part of the al Nashiri defense team or of any other defense team. Neither he nor Captain Filbert has an attorney client privilege with any detainee. 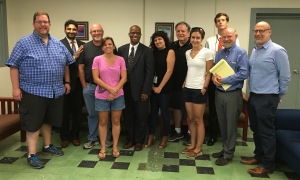 These briefings offered the 9 NGOs insights into a range of perspectives on Guantanamo law and practice. The NGOs on this mission, who agreed that these briefings were insightful and very helpful, expressed hope that the NGO briefings would continue when future NGO representatives travel to Guantanamo for future hearings.

Substance of the briefings

Predictably, the three briefings focused on similar issues. Military Commission fairness (or not). Compliance with U.S. and international law (or not). Transparency of the process (or not). Rights afforded to all stakeholders (or not). Comparisons among U.S. federal criminal law and criminal procedure, the Uniform Code of Military Justice (UCMJ), and the Military Commission substantive and procedural statute, regulations and rules (favorable / unfavorable comparisons).

The lawyers expressed different perspectives on the pace of the proceedings, to whom delays should be attributable, and logistical and other issues regarding trials at Guantanamo Bay versus on the U.S. mainland. They also shared on more personal issues, such as their careers and families, and possibilities for life for the lawyers after Guantanamo. And yes, the topics of Guantanamo iguanas, banana rats, gnats and mosquitos came up.

None of the briefings was on the record, and of course none included any classified information. All the briefings helped NGOs understand critically important matters related to the case at bar – against al Nashiri – and about larger Guantanamo-related issues.

Each of the briefings differed from the others. Each lawyer had a unique personal style, had particular messages they apparently wanted to convey, and used different means to communicate with the NGOS — including visual aids.

Briefing tools used during the week included (without disclosing which lawyers used which briefing tools!): CDs that contain papers for motions on the week’s docket; basic Military Commission instruments and other information projected onto a screen and a staffer to navigate such; CD readers for NGOs whose new generation laptops lack CD drives; prepared remarks; a scribe to record briefing notes; e-mail addresses and invitations for further NGO communication; a follow-up invitation to a bar-b-que (that served Subway sandwiches!); and a staffer who served as photographer for group and individual shots of the lawyers and the NGO representatives.

[Sidebar – The NGO representatives came into contact with various members of the lawyers’ staffs. In every instance those staff members were helpful, informative, and genuinely interested in assisting the NGOs. And, without exception, each staffer was friendly, pleasant, and just nice — both formally during the briefing, and informally when we would bump into them around the Guantanamo Bay Naval Station, whether at Subway or another restaurant, the gym, the bowling alley, or the Guantanamo airport or Andrews Air Force Base.]

NGOs huddled during the week seeking to think of ways that the lawyers might further enhance the NGO experiences. Among the NGO suggestions were for the lawyers to provide NGOs — before the NGOs depart for Guantanamo Bay —  a short summary of the week’s expected motions, the statutory and other information on the CD that was provided, statements / remarks to be presented by the lawyers to the media (if available), and confirmation that the briefing will take place (to prevent NGOs from having to inquire as to whether a particular briefing will occur).

Some of the NGOs wondered about the venues of the different briefings, and who decided which briefings were held in which venue.

The NGOs unanimously agreed that the NGO briefings by all sets of lawyers were very helpful to the NGOs as they seek to fulfill their remit of attending, observing, analyzing, critiquing and reporting on the U.S. Military Commissions.

If NGOs are to be the eyes and ears to the outside world, they should be able to see and hear from the lawyers who are most intimately involved with the Guantanamo Bay cases.  The NGOs all hope that briefings by all sets of lawyers will become routine at Guantanamo Bay during weeks when hearings or trials are held. 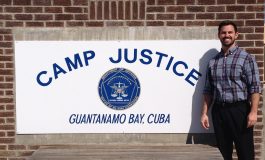